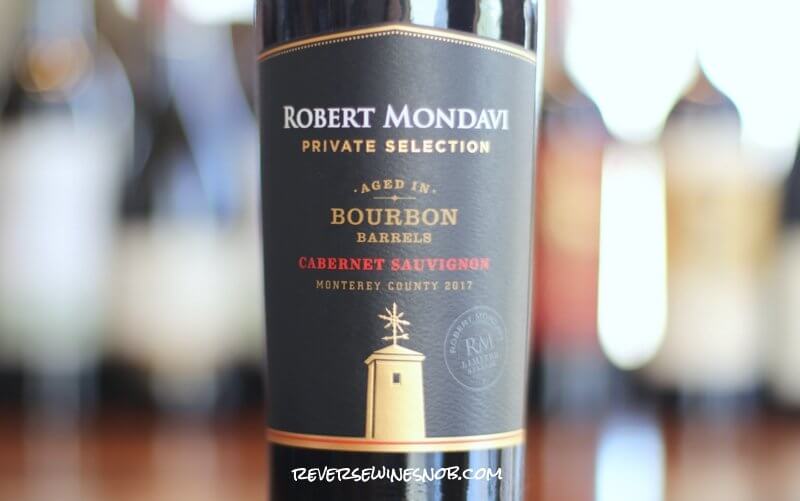 A blend of primarily Cabernet Sauvignon along with Petite Sirah, Malbec and Petit Verdot from Southern Monterey County, Central Coast, California. The wine is aged in oak for a total of 10 months, with a portion of the wine also aged in new American oak bourbon barrels for at least 3 months. It has 4.0 g/L of residual sugar.

The Robert Mondavi Private Selection Bourbon Barrel-Aged Cabernet Sauvignon has an SRP of $14, is available widely for around $10 and at some outlets for as low as $7-$8. It is also available at many Costco and Trader Joe's locations.

This limited release Cabernet Sauvignon blends the craftsmanship of California winemaking with the Southern tradition of Bourbon Whiskey aging. Our coastal California vineyards deliver deep flavors of black cherry and blackberry to the wine. The next step is to age the blend in Bourbon Whiskey barrels for at least 3 months, adding nuances of vanilla, brown sugar and toasty oak.

Bourbon barrel aging is hot and this one represents one of the more popular options on the market given it's ready availability and low price tag. Let's see how it tastes!

The 2017 Robert Mondavi Private Selection Bourbon Barrel-Aged Cabernet Sauvignon begins with a strong, pleasing aroma of dark berry fruit along with lots of vanilla and caramel plus cocoa and coffee. Taking a sip reveals the wine to be smooth, quite tasty and loaded with vanilla. This is pretty much the vanilla Coke of wine, not that that's necessarily a bad thing. It's definitely a good one for the bourbon barrel lovers.

The wine is just slightly sweet at 4 g/L of residual sugar. There's plenty of blackberry and plenty of caramel along with touches of licorice, cola, cinnamon, clove, mocha and more to go along with all the vanilla. It ends dry, grippy and long.

Overall, it's a bit heavy-handed but if you're going to age your wine in bourbon barrels that's kind of the point and this one delivers on the promise. Mission accomplished!

You may also want to check our Costco and Trader Joe's lists!