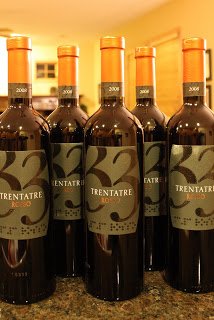 This unique wine comes from the Apulia Region located in the depth of Southern Italy. The blend is an equal amount of three different varietals. Cabernet Sauvignon 33,3%, Merlot 33,3%, and Montepulciano 33,4% collectively aged six months in oak barrels, hence the name "Trentatre" which in Italian means Thirtythree. The color is a deep purple-red with a pleasant fruity nose with hints of plum, cherry, and chocolate. Full bodied, it has a supple finish with soft tannins. Enjoy it with pasta, pizza, grilled meats, seasoned cheese...or even on its own!

The moment I was dreading happened today. I stopped into Trader Joe's to check out what's new (which wasn't much). As I usually do, I figured I would buy a few more bottles of our old faithful the 2008 Trentatre Rosso. When I got to that familiar spot on the shelf, my heart dropped. Nothing but 2009 in the front row. I scanned the back rows just to be sure and found one lonely bottle of the 2008 pushed off to the side. I quickly grabbed it along with a 2009 and went home. It could be just as good, right? Heck, it's possible it could even be better! Still, I had a sinking feeling...so much so that I had a couple errands that took me by another Trader Joe's later in the day. I stopped in hoping to find a case or two of the 2008, but alas, only 2009 at this store also.

Fast forward to tonight...I put the kids down for bed and decided to pop open the 2009. Since the 2008 was good right out of the bottle, I poured a glass for my wife and I and gave it a taste. "Maybe it just needs to breathe a bit," I said to myself, "it's not really fair to judge it so quickly." So I let it breathe. Tasted again. Let it breathe some more. Tasted again and the reality set in. This is no 2008. To be fair, it's not horrible, but it's lost a bunch of its smoothness. It still has some fruitiness to it, but after that the 2009 gets harsh, a bit sour, and shows some heat. The label lists the same alcohol content (exact same label actually except for the neck wrap with the vintage) but as I understand they are allowed a bit of leeway in the alcohol %, so I'm guessing this vintage may be slightly higher than the 2008. There is also an oakiness coming through that I didn't taste in the previous vintage.

It's possible this wine is just too young and could benefit from some aging, but I'm guessing there are going to be a lot of disappointed TJ's drinkers in the next few weeks as they unwittingly pop open the 2009 expecting the same great experience as the 2008...

This is still a somewhat respectable wine for $5.99, but it just barely eeks out a Buy rating (and that may be generous). If you're lucky enough to have the 2008 still in stock at your Trader Joe's, buy as much as you can!

All ratings use a simple 10 point scale with 10 being the best. Find out more about my rating systemhere and check out the Interactive Wine Ranking to find all my reviews! You can sort by type of wine, cost, rating, etc. in the interactive spreadsheet.