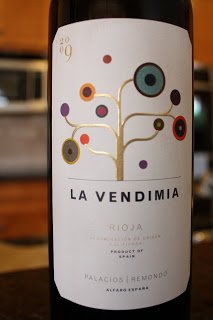 SRP of $12 and available at that price. Sample received courtesy Rioja Wine for review purposes.

"La Vendimia, which signifies 'the harvest,' represents the quality potential of Spanish jovens, or wines that have been aged for less than six month in oak barrels. Made by the famed Spanish winemaker, Alvaro Palacios (whose father founded the Palacios Remondo winery), La Vendimia is a blend of Spain's two original star varieties, Tempranillo and Garnacha. Meant to drink now through the next four years, this consumer-friendly wine can be served slightly chilled and is the perfect accompaniment to any dish.

Rioja, Spain has a history of winemaking that goes back well over 1,000 years. Today the region produces about 300 million liters per year, 90% of which is red. And of this, Tempranillo (a grape native to this area) is the undisputed champion. But this is Spain which means Garnacha is also very popular. And today's wine combines both of those varieties into a tasty little number.

The 2009 Palacios Remondo La Vendimia begins with lots of berry aromas (raspberry mainly), rose petals and some herbal notes. When tasting the raspberry flavors from the nose carry over and there are also some black currant, plum and oak notes. The wine has a bit of a meaty/chewy texture. The "official" tasting notes I read (which rarely seem all that accurate) said it had a hint of fennel and sure enough it does. The finish is of medium length with a little spice and smoke.