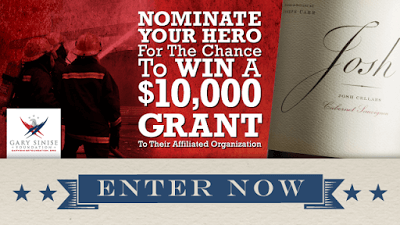 Now through September 17, nominate your hero for a chance to wine a $10,000 grant for their organization!

We're taking a bit of a break from our normal schedule of reviews today for a very worthy cause - supporting our nation's first responders. 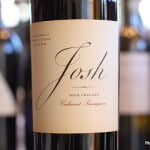 As you may remember from our review, Josh Cellars is a spinoff brand to Joseph Carr wines and launched its first vintage in 2005. The label represents affordable, approachable wines and is an homage to Joe’s more approachable “regular guy” father – Josh.

Josh was a First Responder Fireman in a small lumber-mill town in upstate NY where his father, Joseph Carr’s grandfather, was the Captain of the department. For as long as Joseph Carr can remember, his family, friends and neighbors have all been First Responders. The Josh Cellars Salutes 1st Responders Contest is one way that Joseph Carr has decided to give back to them.

The Gary Sinise Foundation, despite only being in existence for a few years, has made quite an impact building smart homes for wounded vets, serving meals to vets and their families, putting on benefit concerts and literally providing hundreds of thousands of dollars of financial support for scholarships, training and outreach to first responders and their families.

So just how do you enter this worthy contest? Here are the details and the timeline:

So what are you waiting for? Go nominate your hero!