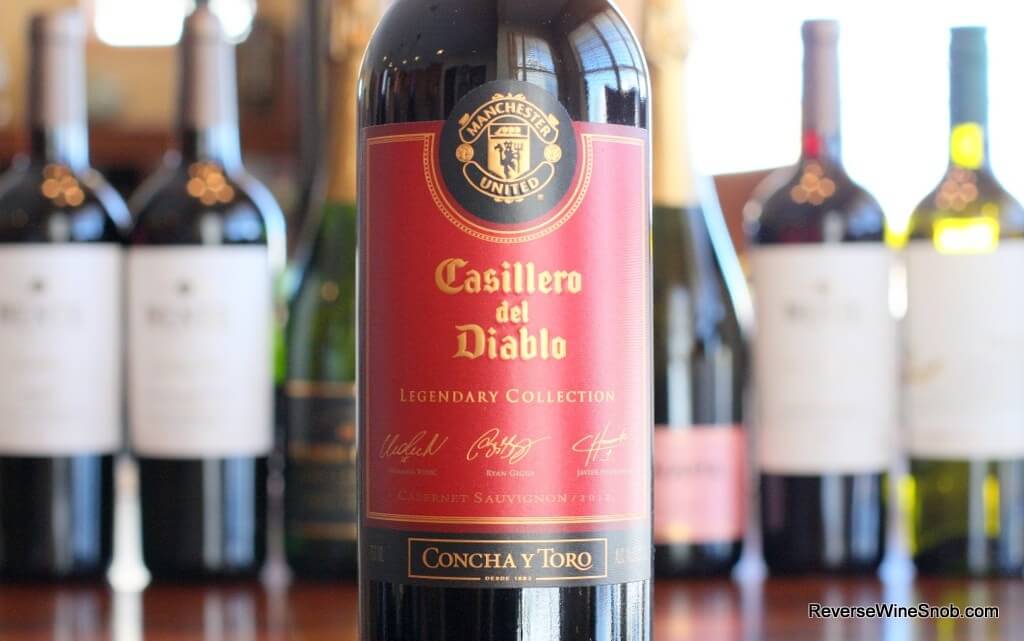 90% Cabernet Sauvignon and 10% Carmenere from Colchagua Valley, Chile. The wine is aged for 14 months in medium toast French and American oak barrels.

Sample submitted for review. The Casillero Del Diablo Manchester United Legendary Collection Cabernet has an SRP of $18. It is available for as low as $15. Imported by Excelsior Wine & Spirits.

Be Part of the Legend.

Well, here's an interesting bottle for soccer fans! This is a one time commemorative bottling of a special Cabernet Sauvignon made for the Manchester United Red Devils and signed by a couple of star players and the coach. It's a fitting partnership given the Casillero Del Diablo (Cellars of the Devil) name, which came about in 1871 when Don Melchor, the founder of Concha y Toro, spread the rumor that the devil lived in his cellar to keep people away from his wine collection! (Now here's a man who was serious about his wine!) The brand has turned into one a worldwide phenomenon, thus the partnership with what Forbes has called "the most valuable team in the world", Manchester United.

And to that end, don't go thinking that this wine is just a repackaging of the regular Casillero Del Diablo Cabernet Sauvignon. That wine doesn't contain any Carmenere and is only aged for 8 months in oak, versus 14 months for this wine. The result? Well, to be honest, if I was tasting this blind I would have been more likely to think Napa Valley than Colchagua Valley.

The 2012 Concha y Toro Casillero Del Diablo Manchester United Legendary Collection Cabernet Sauvignon opens with a satisfying aroma of blackberry, plum, violets, vanilla and a little chocolate. Tasting the wine shows a whole bunch of oaky Cabernet goodness, rich dark fruit and lots of vanilla. This wine is loaded with flavor, so much so that it's almost over the top, but it sure is fun to drink. It almost tastes a bit sweet, but it's just all the rich fruit coming through in this dry wine. There's also a tiny hint of green common to many Cabs from Chile peeking through. It ends dry and long with lingering coffee, licorice and tobacco notes.