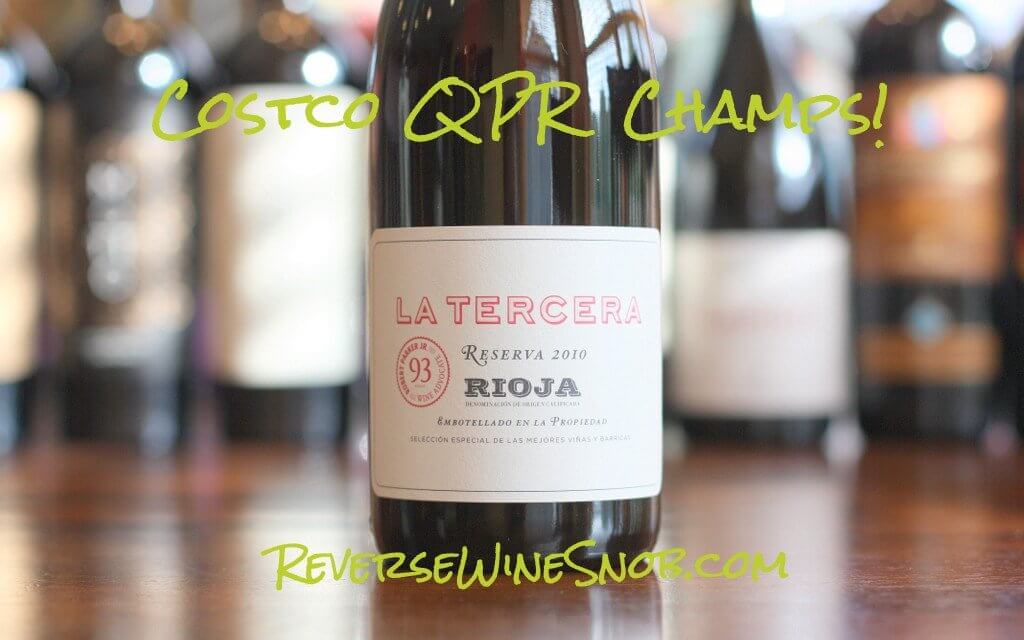 The La Tercera Rioja Reserva, it doesn't get much better than this 2010 Rioja Reserva for less than 10 bucks!

90% Tempranillo, 5% Garnacha and 5% Graciano from Rioja, Spain. The wine is aged for 30 months in French oak barrels.

This fragrant, enticing red with ripe fruit, spice, cocoa and vanilla tones pairs very well with roasts and game, It is produced from vines located within the Rioja wine region (Zone 3) at 568m (1,865') elevation, growing in limestone, chalk, clay and river stones. Average temp. during the April-October growing season is 16.3C (61.5F); annual rainfall is 465mm (18.3 in). It is aged for 30 months in French oak barrels followed by 6 months in the bottle.

This is the type of legendary deal for which we absolutely adore Costco. Our first experience with a deal like this was four years ago with another Rioja Reserva for under $10. We loved that wine so much that we bought a case and drank it over the next year. In hindsight that was a huge mistake -- we definitely should have bought more.

With 30 months of aging in barrel and more time in the bottle before release, it's almost mind-boggling how this wine can priced at less than $10. And in fact, the few other retailers that sell it do so for closer to $20. If you're lucky enough to have your Costco stock this one my humble advice is to buy a boatload.

The 2010 La Tercera Rioja Reserva from CVA (Compania de Vinos del Atlantico) begins with a very pleasant aroma of black cherry, spice, lavender and a little tobacco. It's a bit oaky with a burst of vanilla when first opened but that dissipates quickly and then the fruit comes to the forefront. The medium-bodied wine tastes smooth and savory with lots of rich red and dark berry fruit that is beautifully tinged with spice. Cola and licorice notes also come out as the wine gets some air. So good and so satisfying, it should continue to drink well (if not even better) for the next 3-4 years. In other words, don't be afraid to buy a bunch of this one as these type of deals don't come around very often. It ends dry with lots of lingering flavors and good length.

As always you can find an updated list of all our recommended wines from Costco as well as more tips and tricks for shopping the store here.