Price does not equal quality! Our fourth rule of Reverse Wine Snobbery is Wine Under $20 Is Not A Compromise. 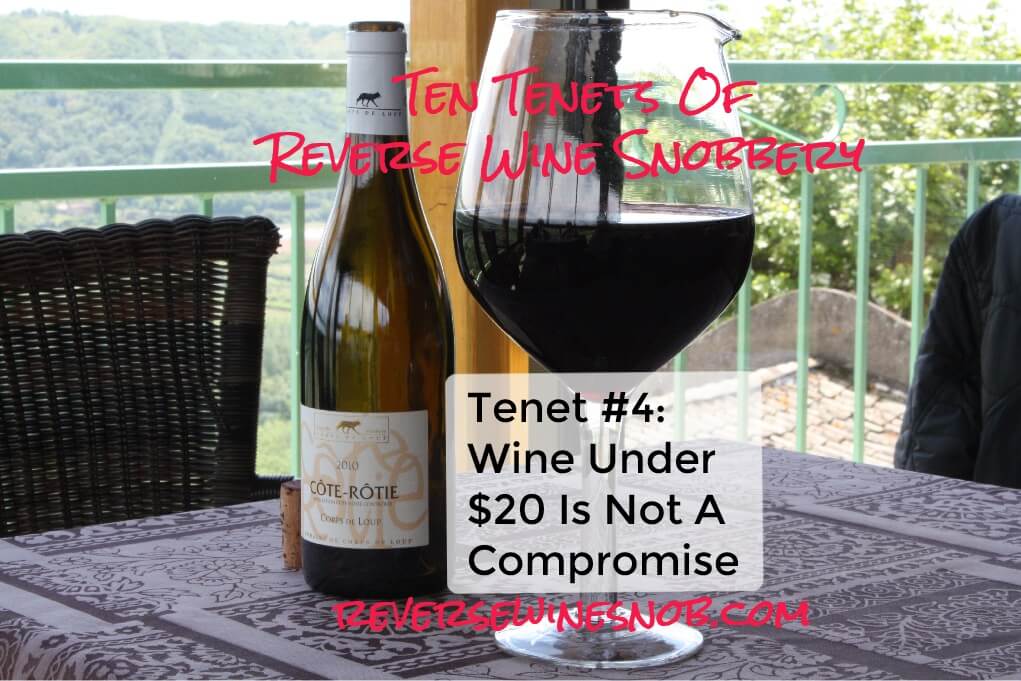 The fourth rule in our Ten Tenets of Reverse Wine Snobbery is at the heart of what we believe here at Reverse Wine Snob. Read on for what we think is a pretty convincing argument that wine under $20 is not a compromise and that in the world of wine price does not equal quality!

Far too often inexpensive wine is marketed as a shadow of something more expensive. What you may notice if you look closely, however, is that this is usually done by the companies that also sell more expensive wines. There's a simple reason the less expensive bottles are marketed this way — they still want to sell their pricier bottles. If they came right out and said their $12 bottle was every bit as good as their $45 bottle, why would anyone (in his or her right mind) buy the $45 one?

Study after study has shown that when blind tasting a mix of expensive and inexpensive wines virtually no one is any good at picking out the expensive one. Actually, when asked their preference most people will choose the inexpensive one!

One of the most famous examples is discussed in Stephen Dubner and Steven Levitt’s book Freakonomics. As a member of the Harvard Society of Fellows for several years, Mr. Levitt was not a big fan of the group's custom of contributing his hard-earned money to $60 bottles of wines at its meetings. Since he was unable to talk his way out of the arrangement he developed an alternative strategy where he hosted a blind tasting that, unbeknownst to the tasters, included an incredibly cheap bottle of wine along with two expensive ones. He also split one of the two expensive bottles into two separate decanters to give the illusion that there were actually four different wines.

You can probably guess where this is going...

The results could not have been better for me. There was no significant difference in the rating across the four wines; the cheap wine did just as well as the expensive ones. Even more remarkable, for a given drinker, there was more variation in the rankings they gave to the two samples drawn from the same bottle than there was between any other two samples. Not only did they like the cheap wine as much as the expensive one, they were not even internally consistent in their assessments.

So not only did the cheap wine rate just as high as the expensive one but tasters didn't even give the same wine the same score when tasting it twice!

There's also the infamous French experiment where testers dyed a white wine red (using a tasteless and odorless dye) and asked wine students (who did not know it was the same wine) to describe it before and after. The result was that students described the very same wine vastly differently solely based on whether they thought they were drinking a white or red wine. [This was recently (Dec 2019) put to the test again by Food Research International, with similar results.]

Richard Wiseman, a psychologist at Hertfordshire University in England, tested hundreds of drinkers to determine if they could tell the difference between a cheap wine and a wine that costs two to three times the price. He found that the subjects picked out the more expensive wine only 53 percent of the time — essentially the same rate as if they had simply guessed. He concluded: "Normally when a product is that much more expensive, you would expect to be able to tell the difference." BINGO!

And how about the case where a group of researchers set out to determine if simply knowing the price of a wine before tasting it would change people's perception of it? Using an MRI machine to scan people's brains as they unknowingly tried the same wine at different price points showed that simply telling them that a wine is more expensive actually made their brains think it tastes better!

As an aside you've probably seen this play out yourself every time you go out to a restaurant thanks to the ridiculous markup on wine. In fact, if you buy wine at a restaurant you're basically subsidizing all the people only buying food. This is simply because the extremely high margin on alcohol is used to keep margins on food razor thin. That per-glass cost you see on the menu? That is typically the restaurant's cost for the entire bottle! The reasoning behind this: if they open a bottle and pour only one glass out of it that night, they won't lose any money. (What other industry gets away with that kind of pricing strategy?)

Ironically, it's the people who do most of their wine drinking in restaurants, buying $40, $50, and $60 bottles, who then turn around and disparage any wine under $20. It turns out the joke is on them because all those bottles they've been wasting their money on retail for $20 or less.

The point of all these stories is simple: If you can simply break yourself of the false belief that the more expensive a wine is the better it will taste, just think how much more enjoyment you would get out of your inexpensive wine and how much money you would save!

Next...Tenet #5: The wine industry often seems to forget about the average consumer. (How to avoid their marketing traps.)

Find our complete Ten Tenets of Reverse Wine Snobbery in summary form here with links to each as they are detailed.

Want more great content like our Ten Tenets of Reverse Wine Snobbery? Sign up for our Free Guide: How to Drink Great Wine...Without Breaking The Bank