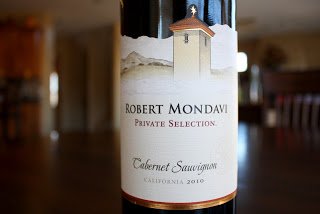 Sample submitted for review. SRP of $11 and available for as low as $8.

"Through tireless winemaking innovation, an uncompromising eye for quality and unshakable faith in California's vineyards, Robert Mondavi was a pioneer in producing wines that rival the world's finest.

Our Cabernet Sauvignon brims with blackberries, plums and spices, with smooth oak nuances from barrel aging.

You may be wondering why a wine that is labeled as Cabernet Sauvignon also has such small quantities of five other varieties in it. Based on the labeling laws in the U.S. a wine only needs to have 75% of one variety to be labeled as such. Today's wine at 88% Cabernet Sauvignon easily meets that requirement. Why they chose to add such tiny quantities of five additional varieties, I don't know, but honestly, I don't really care! Why?