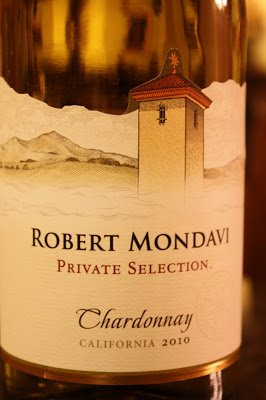 100% Chardonnay from California aged in oak. Sample received courtesy the winemaker for review purposes. SRP of $12, but should have wide availability for $10 or less.

"Through tireless winemaking innovation, an uncompromising eye for quality and unshakable faith in California's vineyards, Robert Mondavi was a pioneer in producing wines that rival the world's finest.

Chardonnay on a stick? No, not really, but this wine did bring back memories of our glorious Minnesota State Fair! A Fair that despite being in the 21st most populated state is the 3rd largest State Fair overall and #1 in daily attendance. Just to wrap your mind around that number there are only 5.3 million people in the entire state (and only around 3 million anywhere near where it is held) but attendance at the Fair was 1.8mm last year! Truly a wondrous institution and I dare say you haven't lived until you've experienced it. But why the connection to this wine from California? It's simple: the first aroma I was greeted with upon opening the bottle was buttered, roasted corn on the cob. And there's no better place on earth to get freshly roasted corn on the cob than the Minnesota State Fair, home to every conceivable food on a stick. So right off the bat, this wine was starting on a good note!

Besides the buttered corn on the cob aroma, the 2010 Robert Mondavi Private Selection Chardonnay also exhibits apple and mango notes. The taste is of tropical fruit (pineapple and mango), apple, oak, and some buttery spice. The slightly sour finish lingers nicely and is on the dry side. A nice Chardonnay to check out while you anticipate all the new foods you will find on a stick at the next State Fair!