[Check out the review of the 2010 vintage, which we liked even better!] 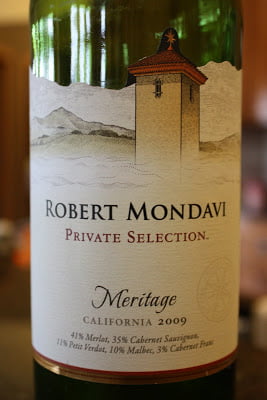 "In 1962 Robert Mondavi made his first trip to Europe, touring some of the great wine-producing regions in France. It was this trip that compelled him to produce California wines that rival the world's best. In honor of his enduring passion for excellence and innovation, we offer Robert Mondavi Private Selection Meritage, a stylish Bordeaux-inspired blend.
13.5% Alcohol"

After tasting the Robert Mondavi Private Selection Chardonnay as part of the Chardonnay Showdown and enjoying it, and being a big fan of a good Meritage, I was really looking forward to trying this wine. Luckily it did not disappoint.

The 2009 Robert Mondavi Private Selection Meritage starts with aromas of blackberry, black cherry, plum, a little vanilla, and some floral notes. It tastes a bit on the jammy side, but very good. The wine has a nice, smooth mouthfeel with black cherry and blackberry flavors. The medium-short finish shows some very soft tannins that are maybe a tad too soft. This wine might be even better on day 2 so give it some air. Very nice.