A wine from the Magic Kingdom. (Chardonnay Showdown post #1.) 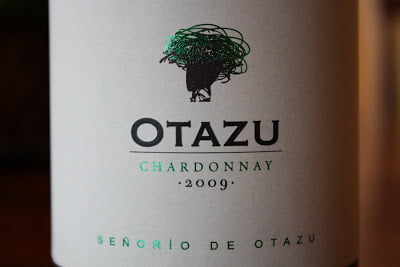 100% Chardonnay fermented in stainless steel (no oak) from Spain. SRP of $14. Available online and at select retailers for as low as $12. Sample received courtesy Wines of Navarra for review purposes.

"OTAZU is unique. Besides being the northernmost winery producing red wine in Spain, it is also a setting, a vineyard, a forest, a magical landscape, and a philosophy of creating high quality wine. Set in the Cuenca de Pamplona basin, it enjoys an exceptional microclimate with mainly Atlantic influences, which favor the personality and quality of the grapes. Otazu's hallmark is the unique nature of its terroir and the continuous selection of its wines. We only make wines using grapes from the 115 hectares of our own PAGO DE OTAZU vineyards, set around the winery, which ensures their selection, personality and quality of our wines.
14% Alcohol"

The 2009 Otazu Chardonnay has aromas of citrus, hay, lemongrass. Those same flavors are evident when tasting in addition to some apricots and melon. The thing that most stands out about this wine is that it smells and tastes remarkably like a Sauvignon Blanc. The finish is on the short side with a bit too much of a flinty component too it. Overall not bad, but if you want a Chardonnay you probably will be disappointed and if you want a Sauvignon Blanc you can probably do better for the price. The wine held up just fine on Day 2.

All ratings use a simple 10 point scale with 10 being the best. Find out more about my rating systemhere and check out the Interactive Wine Ranking to find all my reviews! You can sort by type of wine, cost, rating, etc. in the interactive spreadsheet.