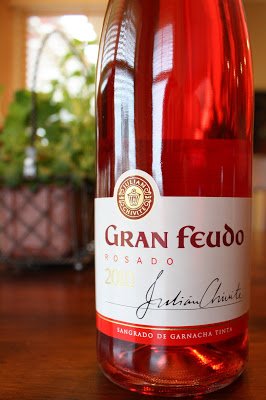 "From 1647 to the present day our Bodega has been passed on from father to son in the Chivite family. Gran Feudo Rosado is an outstanding success in the world of fruity rosé wines. It is made mainly from garnacha tinta grape in the traditional "saignée" method: the juice is separated by gravity. It is the ideal accompaniment for pasta, risotto, vegetable, fish and white meat. Serve slightly chilled.
13.0% Alcohol"

The 2010 Gran Feudo Rosado exhibits aromas of watermelon and strawberry. In the mouth there is a bit of fruit, but not as much as I was expecting from the aroma. A bit of cream and nice acidity balance the wine out. So far so good; however, the finish, while crisp, is short and tart and brings this wine down a notch. The wine also did not hold up very well on day 2.