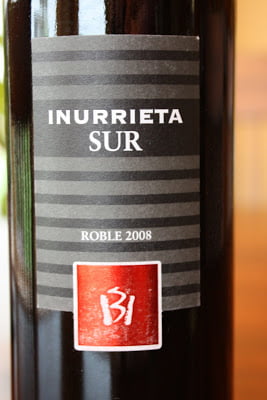 A blend of Garnacha and Graciano. SRP of $13, but should be available for $12.

"Our grapes of Garnacha and Graciano combine as a symbol of character and warmth from the Mediterranean environment. The combination of these varieties at optimum ripeness and the short ageing in American oak barrels, make possible to enjoy a plentiful wine full of aromatic sensations and a very fine tannic expression in the mouth.
15% Alcohol"

The 2008 Bodega Inurrieta SUR has pleasing aromas of blackberry, ripe fruit, and a little cinnamon spice. The predominant flavors when tasting are fruity and sweet with black cherry cola notes. This wine has a silky mouthfeel and good balance. It has a nice long finish and velvety smooth tannins. We found this wine to at its best on the first day. The texture and flavor of this wine bring to mind one of my favorite treats, gelato. Give it a try and let me know what you think!