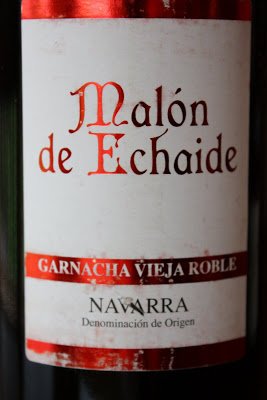 "Since 1951 the growers in Cascante decided to get together and form Nuestra Señora del Romero, the winery has never stopped growing and developing. In keeping with this in 1982 the Los Arcos project was integrated into the winery and in 1993 it was joined with Sesma. The winery is equipped with the most advanced technology and has obtained the International Food Standard Certificate (IFS), one of the first to do so in Spain in 2004.
13.5% alcohol"

Yes, $1.50 is the SRP I was given from Wines of Navarra, but really at anything under $5 this is a steal and blows away anything else in that price range (including 3 Buck Chuck). I'm not saying this wine is great by any stretch, just a great value for less than $5 and the type of wine that Trader Joe's is known for so I'm hoping they pick this one up.

The 2008 Malón de Echaide Tinto Roble has aromas of herbs, leather, dark black fruit, and smoke. This is a simple wine that is meaty and bit rough, with syrupy dark fruit flavors. There's not much of a finish really but what do expect for $1.50? Overall this is surprisingly drinkable Garnacha for the price.