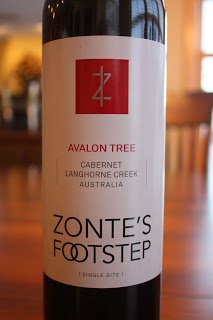 SRP of $16 and available for as low as $15. Sample received courtesy Old Bridge Cellars for review purposes.

"Cabernet is called the king of grapes and at Zonte's Footstep it is so revered. Arthurian Legend had it that whoever could pull Excalibur from the stone would rules as king under the Avalon Tree. Our Avalon Tree is a top picnic spot, we even have a round table!

Zonte's Footstep is named after a 19th century Zante currant vineyard as new pairings follow the original footstep. The currant business dried up, but Zonte's Footstep became our blueprint...

In 2003 a group of mates pooled old white utes and new-ish tractors to grow the best grapes from the best vineyards. All we want to do is taste our fruit in our wine, so we charged our reigning winemaker, Mr. Ben Riggs, with one goal; to make wine true to vineyard so long as it is bloody good drink!

The Avalon Tree vineyard is on a 40 million year old alluvial plain, nestled between two rivers adjacent to Lake Alexandrina, upstream from the River Murray's sea mouth. It is an oasis in a cool desert with vines planted on their own roots, in maritime red sands that sit over pre-Cambrian Limestone and is ideal for growing grapes.

The truth is out there in the vineyard, but the proof is in this bottle.

We reviewed a couple other Zonte's Footstep wines back in September and loved them both. In fact, we loved the Scarlet Ladybird Rosé so much that it has been on several Top 10 lists. (Also reviewed, and enjoyed, was the Doctoress di Lago Pinot Grigio.) So when this Cabernet Sauvignon arrived recently, I was eager to give it a try.

The 2010 Zonte's Footstep Avalon Tree Cabernet Sauvignon begins with pleasant aromas of blueberries, plum, blackberry, spice and nutmeg. The wine tastes of bright, rich fruit with flavors of sweet and sour black cherry. Also present are nice supporting tannins and a good mouthfeel. The finish features blackcurrant fruit that lasts for a long time. A rich and fruity wine with a really nice amount of oak to balance things out. Quite nice!

Find out more about my rating system and check out the Wine Ranking to find all my reviews! You can sort by type of wine, cost, rating, etc. in the interactive spreadsheet.