Trader Joe's gets in on the bourbon barrel trend with this easy drinking example of the style for just $7 plus we address wine snobbery from the Wall Street Journal. The Barrel Heist Bourbon Barrel Cab. 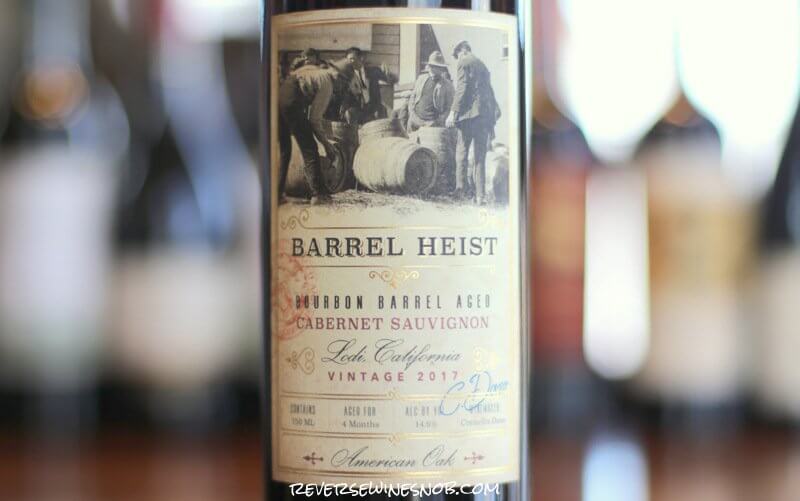 Cabernet Sauvignon from Lodi, California. The wine is aged for 4 months in once used Kentucky Bourbon Barrels.

This wine is available exclusively at Trader Joe's and sells for just $6.99. It is made by Barrel Heist Wines which seems to be run by Monterey Wine Company and American Vintners, who have a number of bourbon barrel Cab and red blend labels including Rack & Barrel, Cask & Barrel and Rackhouse from Lodi and the Toasted Barrel label from Paso Robles.

The year was 1920, and America had just begun life under Prohibition. Dry county after dry county dotted the map. Only with a doctor's prescription could alcohol be consumed legally. An ingenious businessman who had grown up working in his uncle's pharmacy had the brilliant idea to buy struggling distilleries and pharmacies, allowing him to sell bonded liquor for medical purposes to his own companies. In a devilish scheme, he then hired men to hijack his own delivery trucks, steal the liquor and sell it on the black market. For 5 years this plan generated great wealth, but the law caught up with him, and a sentence in a Federal prison for bootlegging was the result. But there is more to the story....

There's no doubt that bourbon barrel wines are hot and have found a lot of love from wine consumers. The Robert Mondavi Private Selection Bourbon Barrel Cab alone sold 2.1 million cases in 2018!

This is despite the fact that a certain wine writer at the Wall Street Journal recently called out bourbon barrel wines as one of "The Seven Deadly Don'ts of Wine". I guess that's not surprising from someone who's primarily focused on the high end of the market, the 6% who normally buy wine over $20, versus the 94% that spend under $20.

Well today we have a bottle that would certainly make this WSJ wine writer cringe – it's a Trader Joe's wine (gasp) that sells for under $10 (the horror) and is aged in bourbon barrels (run screaming from the room). And guess what? It's a solid wine. And a couple dollars less than the popular Mondavi version mentioned above that is also sold at Trader Joe's.

The bourbon barrel influence pops right out of the glass on the 2017 Barrel Heist Bourbon Barrel Aged Cabernet Sauvignon. Lots of smoky vanilla notes plus caramel, cinnamon, cocoa and more are mixed in with dark jammy fruit aromas. The vanilla, cinnamon and other baking spices continue when tasting just as you would expect in this smooth and sweet wine. There certainly isn't anything earth shattering about it, but it's an easy drink for fans of this style, especially at only $7. More sweet berry fruit plus oaky bourbon notes close this one out on the finish.