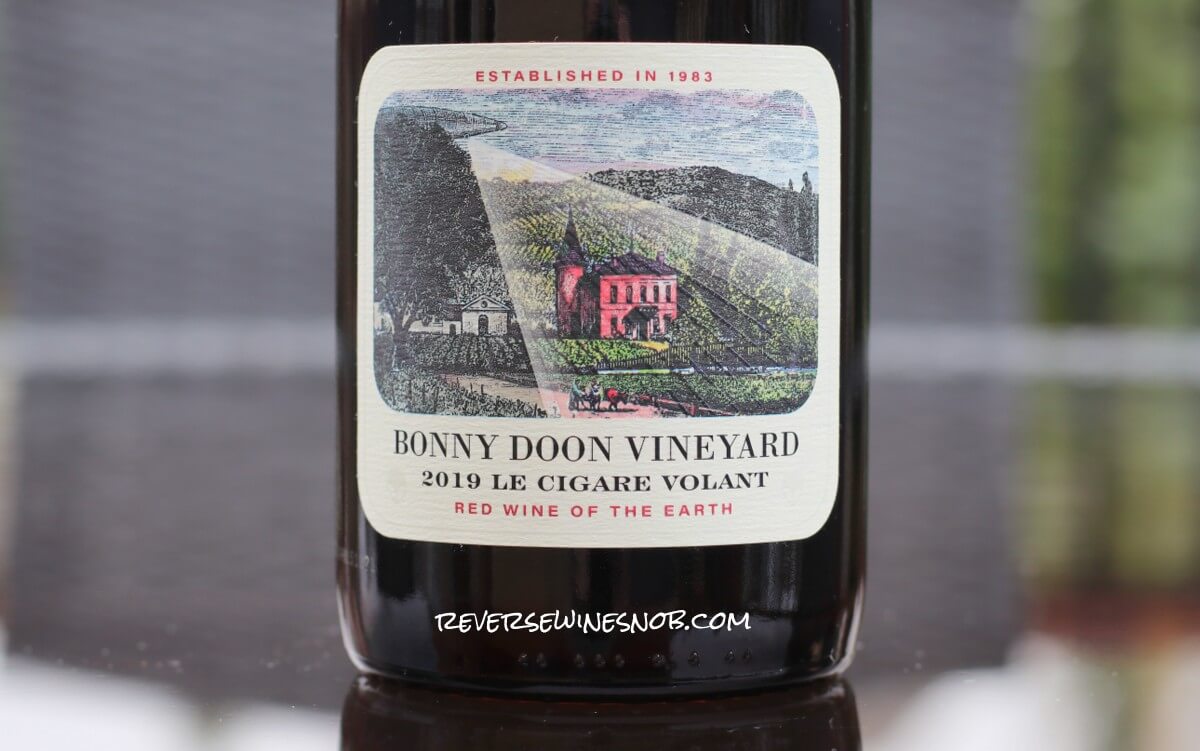 This is the new, re-engineered Le Cigare Volant from Bonny Doon Vineyard that was introduced with the 2018 vintage. Compared to the old blend, winemaker Randall Grahm dropped the Mourvedre from the blend and greatly increased the Cinsault. You can read more about this transition in our previous review of the 2013 vintage that we have included below.

The other big thing to note is that the SRP also dropped considerably, which means this is no longer a Saturday Splurge but instead right in our sweet spot! The pricing has also gone from $45 to $20 for the 2018 (which we also loved) and now to $15 for the 2019 vintage.

Sample submitted for review. The Bonny Doon Vineyard Le Cigare Volant has an SRP of $15 and is available for as low as $13. Ready to buy? Check your local retailers. 11,500 cases produced (as opposed to only around 2,400 cases of the previous version of this wine.)

In 1954 the village council of Chateauneuf-du-Pape was quite perturbed and apprehensive that UFOs or "flying cigars" might do damage to their vineyards. So, right-thinking men all, they passed a legal ordinance prohibiting such landings. The ordinance has worked well, as there have been no such landings since the adoption of this far-sighted legislation. This stellar composition of our Cigare Volant ("flying cigar") contains 55% Grenache, 30% Cinsaut, 13% Syrah, 1% Petite Sirah.

The 2019 Bonny Doon Vineyard Le Cigare Volant begins with a lovely aroma of varied red fruits, licorice, cedar and wintergreen. The more you swirl it the more you uncover, so much so that it's hard not to just keep sticking your nose in the glass.

Taking a sip reveals a lovely blend that is pure pleasure to drink. These varieties work together in near perfect harmony, especially after a couple hours in the glass. It is also much more approachable at this young age than the original version (which was equally delicious but really rewarded patience). In the mouth it features a smooth mouthfeel and similar flavors to the nose, although a bit more tart with some more darker fruit mixed in.

Nice touches of spice lead into the dry, grippy, very long and savory finish. This is still a wonderfully satisfying wine for the price, it's just lacking some of the complexity and wow factor of the 2018 (which we gave a Taste rating of 10) but perhaps that comes with the even lower price.

And now here's the review of the previous version of this wine... 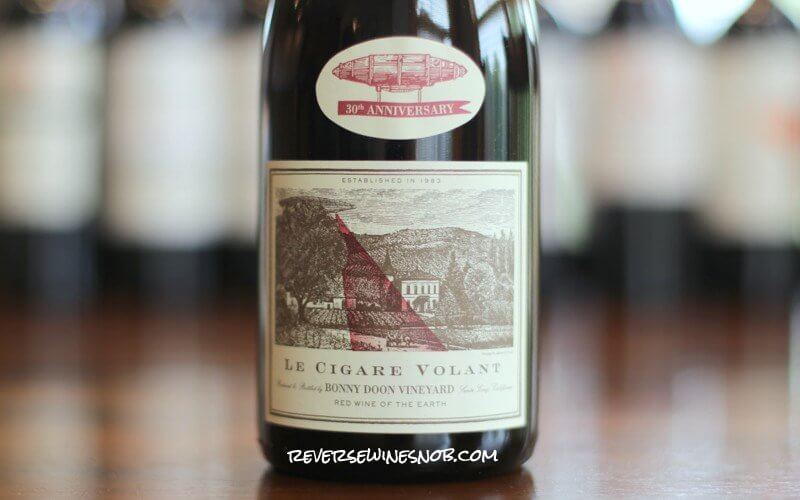 Tasting the 30th Anniversary edition of an iconic and soon to be re-styled wine, the Bonny Doon Vineyard Le Cigare Volant.

Sample submitted for review. The Bonny Doon Vineyard Le Cigare Volant has an SRP of $45 and is available for as low as $30 (Saturday Splurge). Ready to buy? Check your local retailers. 2,400 cases produced.

In 1954 the village council of Chateauneuf-du-Pape was quite perturbed and apprehensive that flying saucers or "flying cigars" might do damage to their vineyards were they to land therein. So, right-thinking men all, they adopted an ordinance prohibiting the landing of flying saucers or flying cigars in their vineyards. The ordinance states that any volitional object that did alight was to be removed directly to the pound.

No woofer this wine, we feel rather that it is quite a stellar accomplishment. The composition of our Flying Cigar is based on the traditional encepagement of Chateauneuf-du-Pape: 55% Grenache, 25% Syrah, 16% Mourvèdre and 4% Cinsault. Resistance is futile.

Le Cigare Volant just might get my vote for one of the best wine names ever because of the wacky and true story behind it, detailed in the quote above from the label. Of course, that's not the only reason for today's Saturday Splurge.

This is a wine that we've enjoyed many times over the years. Yes, it's well over $20 but we're happy to splurge once in a while if the quality justifies the cost and that's exactly what we have here. In addition, the winemaker for this wine and the original Rhone Ranger, Randall Grahm, recently penned an incredibly honest and enlightening blog post about how he will be changing the style of this wine in the future. I encourage you to read it.

Now on to the wine! The 2013 Bonny Doon Vineyard Le Cigare Volant is simply delicious. The wine begins with aromas of fruity dark berries, spice, root beer, smoked meat and a little vanilla. Tasting the wine shows lots of rich tannins and zesty spice that complement the bright and tart berry flavors wonderfully. There are also some black pepper and dried herb notes adding complexity and those smoked meat notes carry over when tasting as well. The dry medium length finish shows good acidity. This is most certainly a Reverse Wine Snob certified Saturday Splurge!