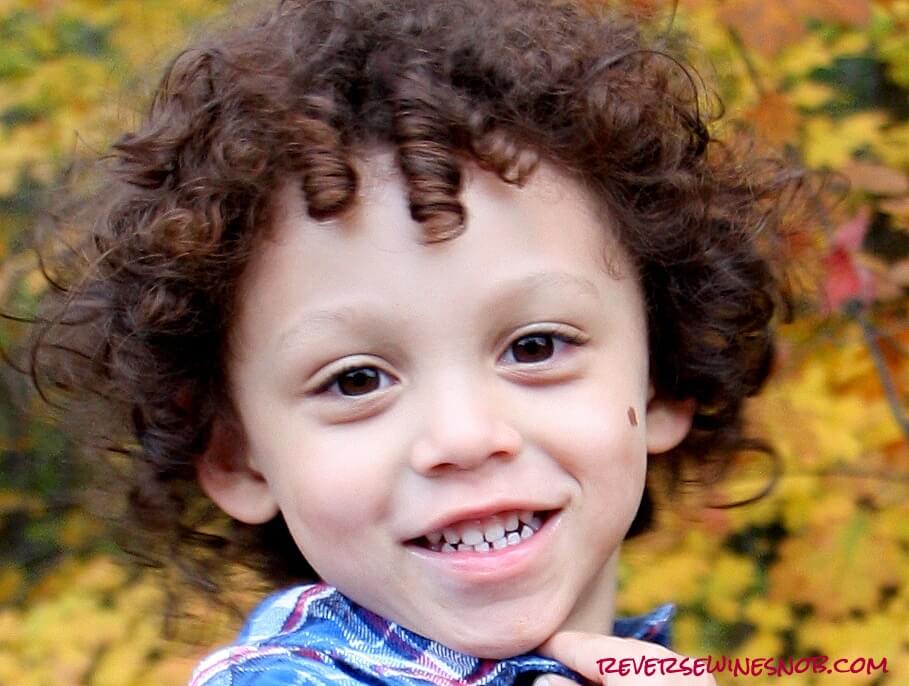 Things get a little personal today as we discuss Fetal Alcohol Spectrum Disorder (FASD), caused by drinking during pregnancy.

Reverse Wine Snob has always been and always will be about wine but today I feel the need to get a little personal and divert into a very important and related subject. You see, my son has Fetal Alcohol Spectrum Disorder, more commonly known as FASD.

Much like autism, fetal alcohol is diagnosed on a spectrum. It encompasses a range of disorders all stemming from the exposure to alcohol in the womb. The damage was once thought to be limited to just a few days of development when facial features are defined, but that is now known to be false. Drinking alcohol anytime during pregnancy can have serious repercussions to your developing child's brain. It's also the reason why I titled this article the way I did - "A Face of Fetal Alcohol Spectrum Disorder". My son looks like a completely normal kid from the outside.

According to the CDC, 2% to 5% of the population may fall on the FASD scale, making it much more prevalent than autism. Despite this high prevalence, it is relatively seldom discussed, little understood and often misdiagnosed as things such as ADHD and other developmental and behavioral disorders. (According to one recent study, 86.5% of youth with FASD had never been previously diagnosed or had been misdiagnosed.) Even more shockingly, it is absolutely 100% preventable. Imagine that. A disorder that affects up to 5% of the population has a fail-safe prevention technique that is 100% effective: Don't drink while you are pregnant or trying to get pregnant.

My wife and I adopted Ezekiel at birth. A whirlwind of events all in itself, he arrived 6 weeks early and was welcomed home after a few weeks in the NICU. Unbelievably cute, with his natural mohawk, we were delighted to add him to our family. However, the fact that all was not well became apparent pretty quickly. One example was that he only slept through the night a handful of times before he was 20 months old. Actually he didn't just not sleep, but about halfway through the night he would wake up inconsolable and screaming for up to two hours at a time. Every single night. An inability to soothe himself, tantrums for no reason and developmental delays also presented early and often. His brain is at times almost literally on fire, triggered into fight or flight mode by the smallest things. This makes taking him anywhere a challenge, not to mention the condescending looks from passersby when your kid melts down in a public place for no apparent reason.

Fetal Alcohol is so damaging because of its effect on the developing brain. Alcohol exposure in utero literally causes the brain to be physically different. The wiring is all off, and this is permanent, not reversible damage. FASD is actually considered a traumatic brain injury and acts similarly in its effects. When our son was officially diagnosed with FASD the doctor also included a diagnosis of "static encephalopathy", or "permanent or unchanging brain damage". She explained this diagnosis was redundant, but necessary because many doctors don't yet understand what FASD is and encompasses.

Today at 4.5 years old, Zeke thankfully sleeps through the night quite reliably, but still faces an uphill battle. We were lucky enough to know his background and that FASD was likely from the very beginning, which led to an early diagnosis and lots of treatment since then -- we're talking 20-25 hours a week of speech therapy, occupational therapy, behavioral therapy, social skills and more. His development is definitely delayed with many of the challenges of a person with an injury to the frontal lobe of their brain. His prognosis is a bit unknown at this point but we're committed to do everything we can to help him succeed even though that comes with a lot of sacrifices for our family.

Being in the wine world, I see comments and articles on a regular basis questioning the no drinking during pregnancy mantra. If they only knew, I've thought. Well, now you do. Don't do it. Even if your kid somehow miraculously escapes any serious consequences, why in the world would you risk it?

One last note for those of you who have made it this far. You may be wondering why we decided to adopt a baby who we knew would potentially have this life-changing disorder? (Especially when we already had two healthy biological kids.) Two reasons:

First, the need is great. The wait for healthy white babies available for adoption can be months or years. For biracial babies that drops down to weeks. For biracial babies with potential special needs like our son, families are desperately needed. (This goes doubly for those kids already in the foster care system.)

Second is our faith. As Christians my wife and I don't believe we are called to live as comfortable a life as possible here on earth. Our calling is greater, to bring glory to our God by serving Him and serving others. Following the example God sets for us in the Bible we believe that all people who accept Jesus by faith are adopted into God's family. And every one of us is disabled by sin before this happens. God sent his own Son to die for a bunch of horribly broken people, to redeem them and make them part of his family. We are simply trying to follow the sacrificial example Jesus set in some small way. Ephesians 1:3-14 says:

Blessed be the God and Father of our Lord Jesus Christ, who has blessed us in Christ with every spiritual blessing in the heavenly places, even as he chose us in him before the foundation of the world, that we should be holy and blameless before him. In love he predestined us for adoption to himself as sons through Jesus Christ, according to the purpose of his will, to the praise of his glorious grace, with which he has blessed us in the Beloved. In him we have redemption through his blood, the forgiveness of our trespasses, according to the riches of his grace, which he lavished upon us, in all wisdom and insight making known to us the mystery of his will, according to his purpose, which he set forth in Christ as a plan for the fullness of time, to unite all things in him, things in heaven and things on earth.

In him we have obtained an inheritance, having been predestined according to the purpose of him who works all things according to the counsel of his will, so that we who were the first to hope in Christ might be to the praise of his glory. In him you also, when you heard the word of truth, the gospel of your salvation, and believed in him, were sealed with the promised Holy Spirit, who is the guarantee of our inheritance until we acquire possession of it, to the praise of his glory.

You can also read more about Zeke's story over at my wife's blog, atypicalmomblog.com.