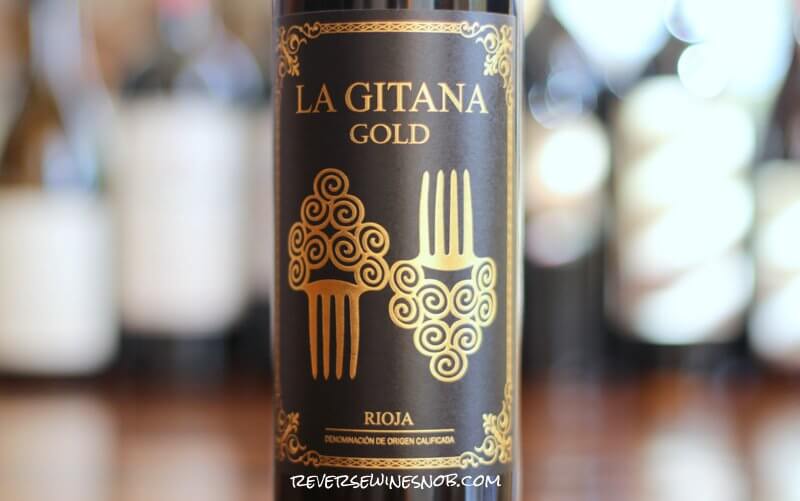 Tempranillo from from 60 year-old vines in Rioja, Spain. The wine spends 28 months in American oak plus another 12 months in the bottle before release.

The La Gitana Gold Rioja Reserva has an SRP of $50(!) according to Wine Enthusiast magazine (as well as a 94 point rating) but is available for only $11.99 at Costco. It appears to be a wine/label produced by Bodegas y Vinedos Tidon and imported by Hidalgo Imports exclusively for Costco.

This makes the $50 SRP a bit suspect in my mind but regardless, Costco has had some legendary deals on Rioja Reservas in the past and finding any at this low of a price point is very hard.

The grapes used for this wine, are hand harvested from 60 year old vines in Rioja. We only used indigenous yeast, maceration and fermentation are done in small controlled temperature tanks to allow maximum extraction and the best expression of fruit along with the presence of american oak for 28 months of aging and a minimum of 12 months of aging in the bottle.

The 2015 La Gitana Gold Rioja Reserva begins with deep, enticing aromas of blackberry, black cherry and vanilla along with lots of other subtle touches like balsamic, tobacco and more. Taking a sip reveals a wonderful concentration of tart fruit, very well integrated spice and a smooth, almost comforting mouthfeel. Add in some notes of vanilla and this quite pleasurable to drink. It ends dry, very long, and a bit grippy.

The 94 point score displayed prominently on the neck of the bottle might be a tad high, but there's no doubt this is a killer wine for just $12. While you really should sip this slowly and let it evolve in the glass, you'll probably have a hard time achieving that goal! Buy a bunch.

You may also want to check out more of our favorite wines from Rioja here!