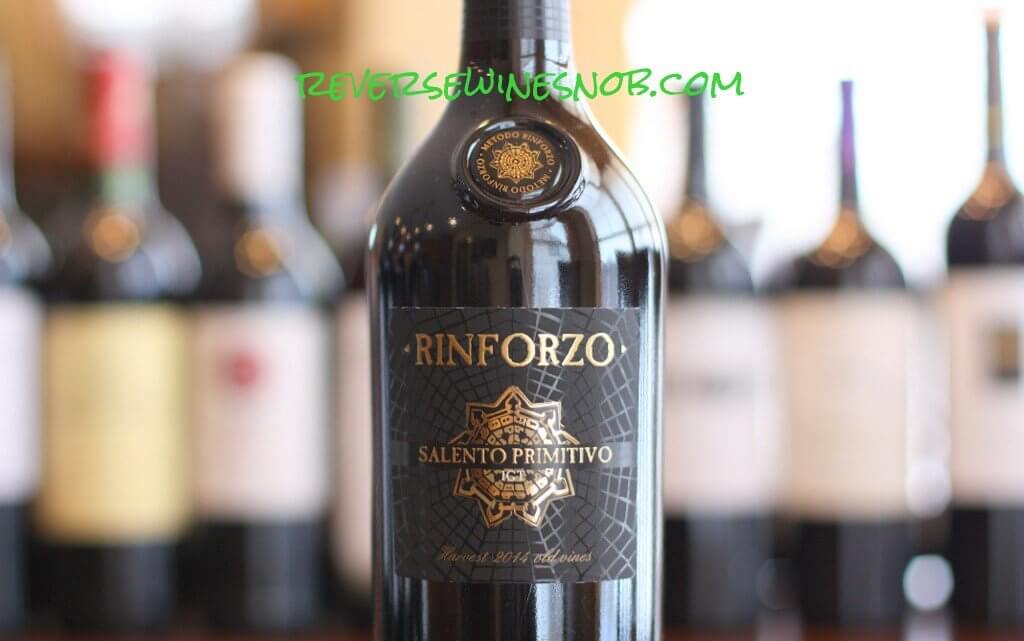 The softer, sweeter side of Primitivo, the Rinforzo Salento Primitivo.

100% Primitivo from Salento, Puglia, Italy. The grapes are dried for four weeks after harvest and the wine spends 8-10 months in medium toasted oak casks.

This review is brought to you by Rinforzo.

The Rinforzo Salento Primitivo has an SRP of $29. This wine is new to the U.S. market but you can check for availability here.

Rinforzo (Reinforce) is a particular method practiced by MGM Mondo del Vino's winemaking team requiring a wise management of the slightly dried grapes both in small cases and in "Fruttaia" (fruit chamber). The final result is used to "reinforce" the best batches of Primitivo Salento. Thanks to this we obtain a complex wine, rich in personality and elegance. To be served between 14 and 16C. The best match? Let your senses drive you...responsibly.

We're huge fans of wines made from dried grapes like Amarone. At the same time, we've always wondered why more wines aren't made in this fashion. As such, it's great to see wines like the Barbera we reviewed a few weeks ago as well as today's Saturday Splurge.

The 2014 Rinforzo Salento Primitivo begins with a very inviting aroma full of spiced berry fruit as well as a little vanilla and pepper. The wine tastes like a soft, yet still big and rich Zin with a luxurious mouthfeel that I really enjoyed. It's a bit on the sweet side but shows good balance. You'll also find tons of jammy berry fruit (a bit on the raisined side), nice spice, herbal notes and more touches of vanilla and black pepper. Dry tannins lead into the lasting finish. A certified Saturday Splurge and definitely something fans of slightly sweet Italian wines will want to check out!