If you're prospecting for some tasty Cab you've come to the right place, the Three Finger Jack East Side Ridge Cabernet Sauvignon. 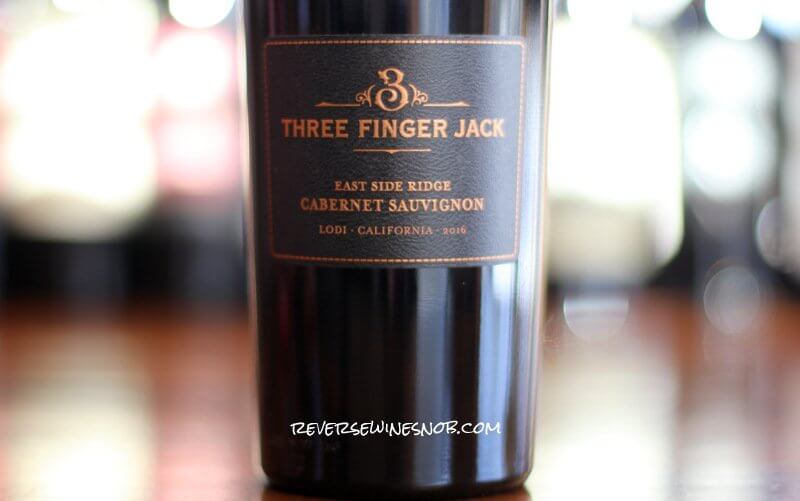 76% Cabernet Sauvignon, 9% Petite Sirah, 8% Malbec, 6% Merlot and 1% other red varieties from Lodi, California. Part of the wine is aged in American and French oak with the rest in stainless steel.

Sample submitted for review. The 3 Finger Jack East Side Ridge Cabernet Sauvignon has an SRP of $22 and is available for as low as $14.

Legendary outlaw Three Finger Jack and his notorious reputation roamed California during the Gold Rush in search of riches. Inspired by his daring character, these wines boast immense structure and hardy flavors sure to stand the test of time. Like Jack, our Cabernet Sauvignon is a bit of an outlaw and can stand proud on its own or alongside grilled flank steak.

The 2016 Three Finger Jack Cabernet Sauvignon has a lot of good things going on in the aroma including rich dark berry fruit, spice, mint, violets and more. Taking a sip reveals a big, rich wine with tons of juicy dark fruit and plenty of varied spice notes. It's a bit sweet but really tasty. In fact, it almost tastes more like a big Zin than a Cab, but either way this one should be popular. Slightly chewy tannins lead into the spice filled, dry and long finish.

It's a cool bottle too but heads up that the cork is shorter than normal so if you're not paying attention you can easily go all the way through with your corkscrew and end up with a few bits of cork in your wine.

You can also find more of our favorite wines from Lodi here.