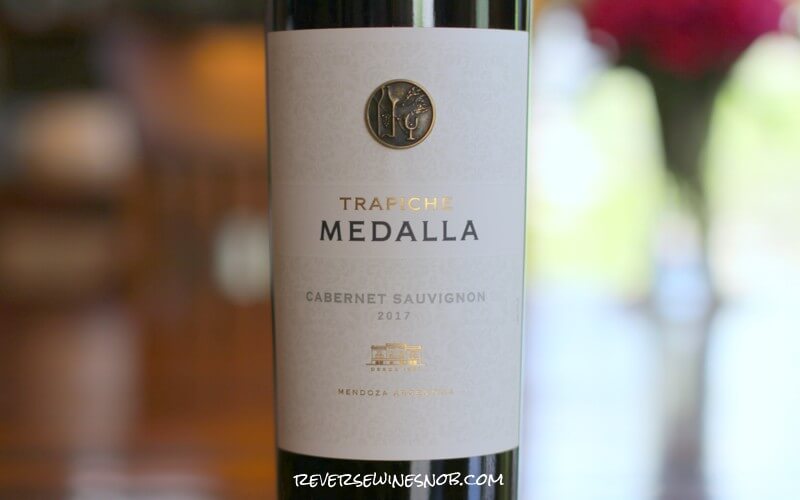 100% Cabernet Sauvignon from estate vineyards in Cruz de Piedra and Lujan de Cuyo in Mendoza, Argentina. The wine spends 18 months in French oak barrels and has 4 g/L of residual sugar.

Sample submitted for review. The Trapiche Medalla Cabernet Sauvignon has an SRP of $20 and is available for as low as $16.

This wine has been crafted with grapes from ancient vineyards located in Mendoza's Primera Zona, a premium winemaking area, under meltwater irrigation.

A deep red, it offers aromas of ripe blueberries with balsamic and spicy notes of green pepper and tobacco. Its soft and ripe tannins contribute to a persistent feel on the palate.

The 2017 Trapiche Medalla Cabernet Sauvignon opens with lots of super ripe dark fruit plus vanilla, spice, a little green pepper and a bit of a savory herbal note on the aromatic nose.

Taking a sip reveals a nice and juicy Cab with a smooth and silky mouthfeel. Nicely balanced, this is pretty tasty stuff. It features tons of deep flavors and just the slightest hint of green pepper (pyrazine) which isn't always our favorite but it doesn't detract here. This is very nice.

It ends dry, long, juicy and savory with lots of lasting sweet fruit notes in this dry wine.

We also had the chance to try the 2016 vintage which seems to be the primary one available at the time of this review. There might be just a touch more green pepper on the 2017 but otherwise we found them to be pretty similar. The 2016 might get a slight edge in taste right now but that's likely just from an extra year in the bottle which the 2017 will have soon.

You can also find more of our favorite wines from Argentina here.