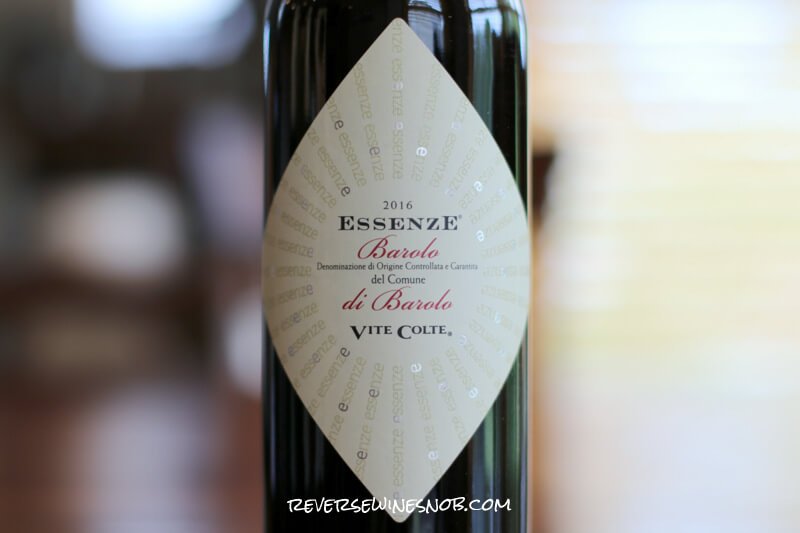 100% Nebbiolo from the municipality of Barolo in Piedmont, Italy. The wine ages for 24 months in small oak barrels.

Sample submitted for review. The Vite Colte Essenze Barolo di Barolo has an average price on wine-searcher of $39 (Saturday Splurge) but can be found for as low as $28. There's no info on the back label except that the wine has 14.5% alcohol.

Everybody knows the Barolo region in Piedmont is a special place. Made from the Nebbiolo grape, these are some of the most revered wines in the world. With 38 months of aging required before release (at least 18 months in barrel) it's pretty rare you can find one under our $20 limit. Today's is not under $20 although it is quite a reasonable price all things considered. (And stay tuned as next week we will feature one well under $20!)

The full name on today's wine might seem a bit cryptic but the official Barolo region covers a number of different communes, including the actual village of Barolo itself. So the name here (Barolo del Comune di Barolo) is just indicating that this is a Barolo wine from around the village of Barolo as opposed to say Barolo del Comune di Serralunga d'Alba or one of the other villages within the larger Barolo production zone.

Tasting the wine reveals tart, juicy fruit with wonderfully integrated notes of spice from the oak aging. There's also a touch of earthiness and minerality under the fruit. While Barolo is known for its aging potential, this one is also super drinkable right now.

Chewy, dusty tannins lead into the dry, very long finish with all the notes from palate lingering wonderfully in the mouth. This is definitely Saturday Splurge worthy!

Looking for more great wine from Italy? Check out our giant list of The Best Italian Wines!

You can also check out more of our Saturday Splurge selections here.