Our Ask The Expert series is back and today we tackle why some Bordeaux cost so much, including tips to find value in this sea of high prices. 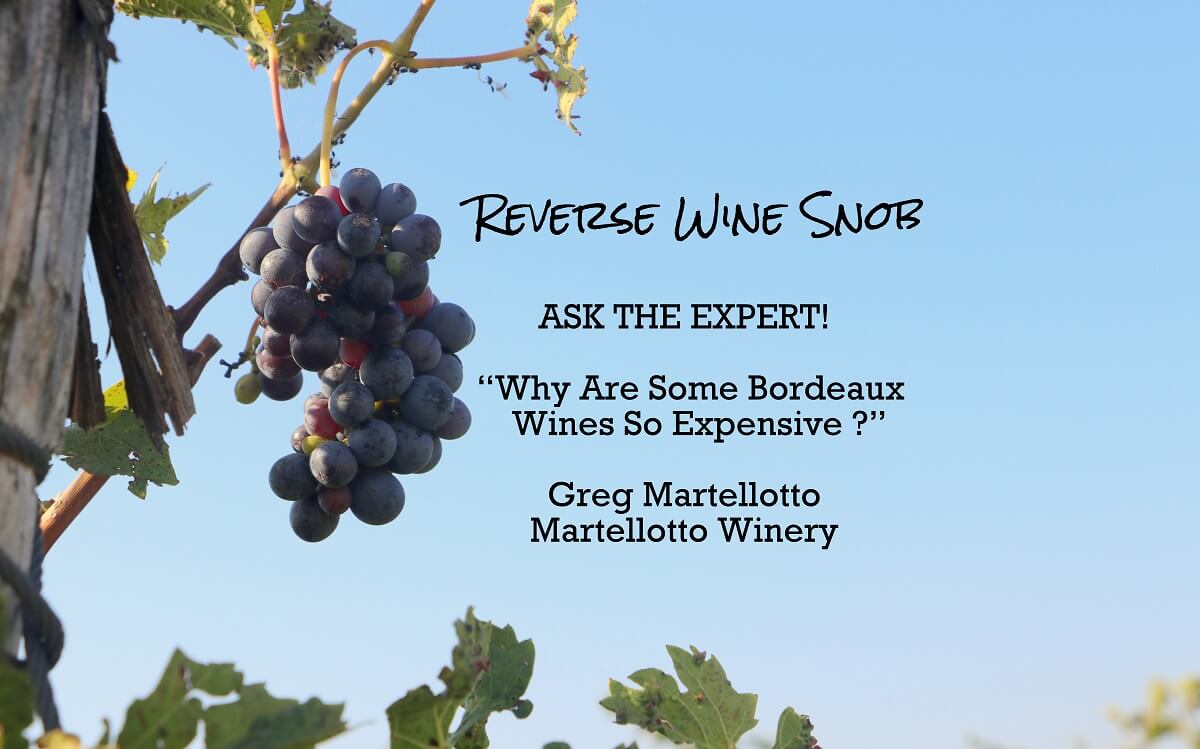 To answer today's question we've enlisted winemaker Greg Martellotto, who has the unique experience of running Martellotto Winery as well as an import business, One Vine Wines. (You may remember his excellent wines from previous Insider Deals.) He breaks down why some of Bordeaux wines are priced so high but also why this region is still a great place to look for value. Thanks Greg!

Top Bordeaux wines are indeed some of the world’s most expensive, leading many people to wonder why. Are they really worth that much more than an ordinary Bordeaux? Wine enthusiasts who buy top Napa Valley Cabernet Sauvignon will find prices similar to those of top Bordeaux.

Bordeaux is France’s commercial powerhouse of wine and indeed the epicenter for the global wine biz. Bordeaux is well known for its long-lived, complex wines and the first growth wines like Margaux, Lafite, Latour, Mouton, and Haut Brion are globally recognized brands that command premium pricing. Neighboring England, longtime partners in Bordeaux, covet their precious “claret.”

So many factors influence the price of wine, starting with location. To make great wine, you need the right land with the right climate (the terroir). Then you need to determine which grape varieties are most suitable. Finally, consider the costs of planting, growing, harvesting, fermenting, and aging, plus distribution and marketing.

And that isn’t all. Other factors impacting a wine’s price include vintage variation due to weather, winemaking talent, supply and demand, reputation, scores, exchange rates, taxes and tariffs, speculation, snob appeal, and bragging rights. On top of these, the 1855 Bordeaux Classification, which set prices for the 60 top wines, still influences prices today. Surprising perhaps, given that quality hasn’t always been as consistent.

Let’s not forget brand value. The Bordeaux brand has been polished over centuries. Its wines were served to the Queen of England, purchased by Thomas Jefferson, poured at the Kennedy White House, and lauded by Robert Parker. All this appealed to the uber-wealthy who flocked to the region and sent prices soaring.

But, in the end, a bottle of wine is worth whatever someone pays for it.

Most of us wine drinkers around the world will never drink the most expensive Bordeaux. Wines like Petrus or Le Pin, both from the Pomerol appellation, will remain in the hands of the uber-rich. But we can afford to drink a fantastic Bordeaux from a less famous producer if we know how to find them.

Most people don’t realize that Bordeaux provides some of the best quality for value wine in the world. Bordeaux is a vast region, the second-largest in France, so it produces a lot of wine. The average price of Bordeaux Supérieur, a large appellation, runs about $15 a bottle!

It’s not only the famous areas of Pauillac or Margaux that create beautiful wine. Many producers from other appellations such as AOC Bordeaux, Bordeaux Supérieur, and Crémant de Bordeaux (sparkling wine) routinely serve up marvelous wine for reasonable prices.

Bordeaux is surrounded by water, the Atlantic Ocean, and the Gironde and Dordogne rivers in Southwestern France. The unique climate and soils nurture the grape varieties used in these blended wines: Merlot, Cabernet Sauvignon, and Cabernet Franc for the reds and Sauvignon Blanc and Semillon for the whites.

Left Bank wines, mostly made of Cabernet Sauvignon, come from the Gironde river’s southeastern side, called the Haut-Medoc. Right Bank wines, mainly Merlot, come from the northern side of the Dordogne. Between lies Entre-Deux-Mers and Bordeaux Superieur, which most people overlook but delivers good value quality wine. Additional quality appellations that deliver bang for the buck include Fronsac, Cotes de Castillon, Cotes de Blaye, Cotes de Bourg and satellites around St. Emilion including Lalande de Pomerol and Lussac St. Emilion.

With literally thousands of producers around Bordeaux to consider, it pays to know which ones do a good job and which ones to stay away from. The sweet spot runs between $18 to $40 for an excellent quality wine from a smaller, or “petits” châteaux. Avoid mass-produced wines in favor of family-owned properties and estate chateau.

Even top critics agree that although the classified growth wineries receive much of the attention in Bordeaux, the region remains one of the best places in the world to find good value wines. There are 57 appellations across Bordeaux, making it the largest producer of appellation wines in France. When you recognize the size of this large wine region and the sheer number of producers, it makes for a very competitive marketplace.

Thanks again to winemaker Greg Martellotto of Martellotto Winery for his answer to the question: Why Are Some Bordeaux Wines So Expensive?

Looking for more answers to your burning questions? You can find the full Ask The Expert series here!