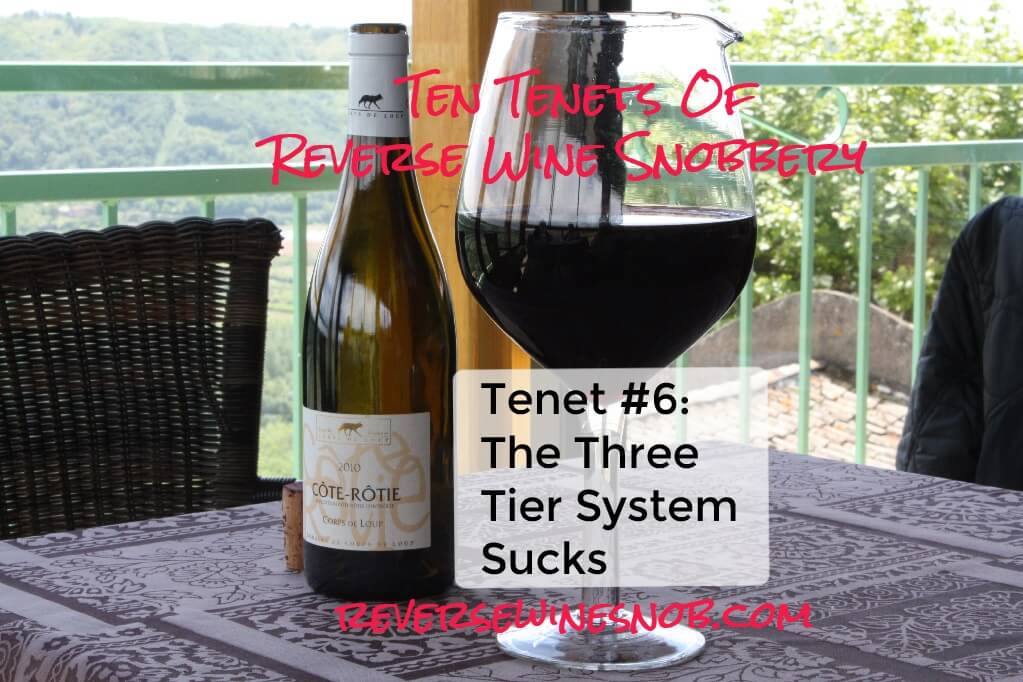 Tenet #6 in our Ten Tenets of Reverse Wine Snobbery details one of the biggest factors negatively impacting consumer's enjoyment of wine, yet also one of the least well known. It harks back to a time of protectionism and regulation that few thought could survive the internet age. Unfortunately it has, but it's time for it go.

The three tier system is the distribution system that was put into place in this country following Prohibition. Almost all states follow this system, which essentially separates the "three tiers": producers (wineries and importers), wholesalers/distributors, and retailers.

For the most part, each tier's functions are not allowed to cross over into the other. This sounds OK on the surface, but it should also be no surprise that when you legislate, for example, that retailers must buy all their wine from a wholesaler, you give a tremendous amount of power to someone who has no real incentive to work in anyone's interest but his or her own. The interests of consumers (low prices and lots of choices) are nowhere to be found.

Did you know there are over 125,000 different wines produced each year? Yet your average wine store only has a few thousand of them and over half of the wines on their shelves come from only three companies.

Much of this has to do with the distribution system in the United States, where there are only around four hundred distributors controlling consumers' access to wine. If your local distributors don't have it (or simply don't want to go through the bother of carrying it in the case of many small brands), you're out of luck unless you live in a state that allows the direct shipment of wine through the mail (which is also quite limited).

This unnecessary legal protectionism results in situations like what happened a few years ago in Florida, where craft brewers decided it would be nice to sell their own beer from their own tasting rooms. Distributors in Florida balked at this — it would not be safe for the community! The Florida Senate therefore passed bill SB 1714, which called for distributors to operate in a strict order: pick up cases of beer from the brewery, take it to their warehouses, and then deliver the very same cases of beer back to the very same brewery. The bill also mandated that this new structure would result in an astounding 30 percent markup for the distributor for doing nothing but unnecessarily moving around cases of beer!

Although the distributors in Florida suggested the bill was passed to protect the community, that's not true. As Tom Wark suggested on his blog Fermentation, distributors have been protected for so long that they are not even afraid to admit the real reason for the bill: competition! Mitch Rubin, the executive director of the Florida Beer Wholesalers Association, stated the following on WSRQ Sarasota Talk Radio:

What we're very concerned about is, really what folks do is get a brewery license, get this retail license, but then brew the beer at some centralized facility . . . and then ship the beer into this so-called brewery. Then it goes out to the consumer through the retail portion of the premises in competition with distributors and retailers.

What other industry is entitled to protection like this from competition at the expense of consumers? When I asked winemaker Randall Grahm of Bonny Doon Vineyards about his thoughts on the three tier system for my book, he stated:

I'm sure I'm not the first person to come up with this pithy analogy, but the three tier system in the U.S. is very much like the Mafia — set up to insure that the relevant players, in this instance, the wholesalers who originally designed the system, are insured an orderly allocation of profits (and the assurance that they will ultimately get paid).

I was able to see all of this play out just recently in my neck of the woods as a giant wine retailer opened its first stores and a statewide beverage association tried to prevent cities from granting them liquor licenses. Why? They fear competition, plain and simple. The beverage association's website proudly proclaims its commitment to protecting its members from competition through legislative lobbying as well as such noble accomplishments as:

God forbid wine be sold in grocery stores and that the DWI blood alcohol level be lowered to save more lives! What other retail industry has the luxury of this kind of protection from competition, at the expense of consumers, in this day and age? My goodness, in Colorado you can smoke pot but you still can't bring your own bottle of wine into a restaurant.

Now to be fair, wholesalers/distributors can serve a vital function. Most retailers and restaurants are not buying huge quantities of wine at one time, nor do they have the temperature-controlled space to store large quantities of wine. Distributors solve this issue by storing wine and delivering it when needed, which is especially important in hot climates, as heat is wine's archenemy. (Even short periods of time exposed to moderate heat can completely destroy the taste of a wine.)

The critical thing here, however, is that there's absolutely no reason this distribution function needs to be codified into law. Make it optional and those distributors that do a good job will still have plenty of business, but it would also allow retailers to order wine directly if they so desire, essentially opening up that entire market of 125,000 labels to their customers. As Andrew Murray of Andrew Murray Vineyards stated to me:

Bottom line, it would be a better place if the three tier system was optional . . . not required. The only people it protects are government coffers, cronies, and distributors.

And so I have to ask again: What other industry, besides cable companies perhaps, is allowed to operate this way? (And we all know how much we hate cable companies, right?) In just about every other sector of consumer goods the Internet has helped to do away with protectionist systems like this. Will it happen here? I hope so but the three tier system lobbyists are fighting hard against that change as well, doing everything they can to restrict direct wine shipments, especially from retailers.

Even so, if you are within one of the thirty-five to forty states that allow you to buy at least some wine online I encourage you to do it. Not only will you be helping to drive change in the industry but you'll also find a vast world of wine way beyond what is normally available in your local market. (Find some practical tips on how to buy wine online here.)

Find our complete Ten Tenets of Reverse Wine Snobbery in summary form here with links to each as they are detailed.

Want more great content like our Ten Tenets of Reverse Wine Snobbery? Sign up for our Free Guide: How to Drink Great Wine...Without Breaking The Bank