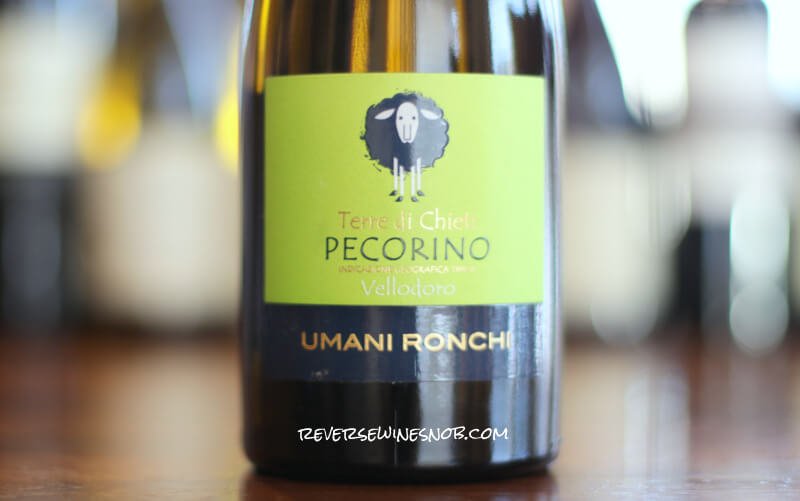 100% Pecorino from Terre di Chieti, Abruzzo, Italy. The wine ages in stainless steel for 4 months and has 8 g/L of residual sugar.

Sample submitted for review. The Umani Ronchi Pecorino has an SRP of $17 and is available for as low as $14. Imported by Vineyard Brands.

The Abruzzo region of Italy has always been known for sheep and agriculture. The connection between these two regional industries is so strong that eventually a grape varietal was named "Pecorino" or the "grape of the sheep". Known for its aromatic concentration and marked acidity, Pecorino is a low-yielding grape, which nearly led to its disappearance, but fortunately it has been recently redisicovered. Umani Ronchi's Pecorino project started in 2005 to revitalize various Adriatic-native varietals, as well as to strengthen the winery's offering from Abruzzi. Bright with a straw yellow colour, this 100% Pecorino presents intense aromas of fruit and flowers, with very clear and persistent mineral notes. On the palate it shows good structure and pleasant freshness.

As the label mentions, Pecorino, a grape native to Italy, was thought to be extinct in the mid-1900s. Luckily it was rediscovered in the 80's and has had a nice revival throughout central Italy since that point. Today we taste an excellent example.

The 2018 Umani Ronchi Vellodoro Pecorino begins with a pleasing aroma of honeysuckle, lemon, lime, melon and little bit of a herbal note. The medium-bodied wine tastes fresh with crisp acidity and a lively mouthfeel. It has similar flavors to the nose although a bit more tart in the mouth and even a little bit of minerality. This is delicately delicious -- those are some smart sheep! It ends with a refreshing, tart and lip-smacking finish.

Looking for more great wine from Italy? Check out our giant list of The Best Italian Wines Under $20!