"This inaugural bottling of a special cuvée of Le Cigare Volant is identical to our normale, but, owing to its unorthodox elevage, quite different in its presentation. After a short tenure in barrel, assemblage, and completion of malolactic fermentation, the wine was removed to 5-gallon glass carboys (bonbonnes), where it reposed sur lie for 23 months. This yielded a rare degree of integration and complexity, plus a preternatural degree of savoriness. This Reserve bottling is composed of 45% Grenache, 30% Syrah, 13% Mourvedre, 7% Cinsault, and 5% Carignane.

Today we have another special super splurge for the diehard wino in your life. As I explained in our post on the Mira Winery Napa Valley Cabernet Sauvignon 2008 - Give Them What They Want:

"If you're like me you may have a few wine loving friends that simply insist on spending more than $20 a bottle. And while I applaud efforts to try and convert them to our ways, or even at the very least get them to grudgingly admit wine under $20 can be "OK", gift giving at the holidays is not the time to do it. I say give them what they want, it is a gift after all! And so to aid you in these efforts I'll be highlighting a handful of Saturday Splurge wines leading up to Christmas that are a bit outside our normal price range, I hope you'll bear with me and even find this helpful!"

And today we have the perfect wine. In addition to the amusing story of where the wine gets its name (a village council banned cigar-shaped alien aircrafts, le cigare volant, from landing in the vineyards of Châteauneuf-du-Pape in 1954 after they were rumored to have been spotted) the Reserve version of this wine is even more unique due to the method of aging it.

Instead of using barrels, or stainless steel, the wine is bottled up in small glass containers like a home winemaker would use:

"What we do is after the Cigare Volant normale has finished malolactic fermentation and the final blend composed, we then add a modest amount of sulfur dioxide (maybe 35 ppm.), bottle the wine up in 5-gallon carboy, seal them up very tightly, and place the bottles on their sides. The lees that repose at the bottom are agitated with a Teflon-coated stir bar inside the bottle through the agency of strong magnets, thus re-suspended."

Did you catch that last part about the magnets? Basically a steel rod is inserted into each glass container and then magnets are run over the outside of it to stir the wine and "agitate the lees". (Lees are the dead yeast cells and other material that sinks to the bottom, stirring this can help improve the flavor of the wine.) Getting the idea that there's a mad scientist behind all this? I doubt this is the first time Randall Grahm has been referred to as such! But enough talk, let's see how this wine tastes!

The 2008 Bonny Doon Vineyard Le Cigare Volant Reserve begins with a strong and savory aroma of blackberry, black cherry, smoked meat and leather that continues to evolve and change the more time it has in the glass. The wine tastes wonderfully savory with just a little spice (that intensifies on the finish), dark ripe fruit like black cherry, blackberry, raspberry, and even some nice minerality. And that's not it! There's also good acidity and nice silky smooth tannins with just a hint of dustiness. It ends with a long, dry and savory finish. Guaranteed to make someone's Christmas merry. 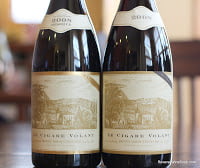 Want something almost as good but quite a bit less expensive? Also check out the non-reserve version of this wine. We reviewed the 2007 previously and after recently tasting the 2008 I can confidently say that it is excellent as well:
Bonny Doon Vineyard Le Cigare Volant 2007 - A Sophisticated and Scrumptious Saturday Splurge.