Today we have a pair of Barbera, both from Piedmont. The first comes from the Barbera d'Alba DOC which encompasses the town of Alba and the surrounding area and overlaps with the Barolo and Barbaresco designations. (In fact, today's wine comes from a vineyard in La Morra which also produces Barolo.) The second comes from Barbera d'Asti DOC which, as you might expect, surrounds the town of Asti. 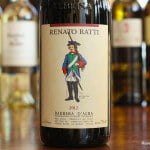 "Rich in body and in color, warm and robust, pleasantly tart when young, a wine suitable to aging. The particular soils of La Morra yield to it a measured acidity along with superb elegance. A wine suited to our hearty local dishes as well as refined meat dishes and aged cheeses.

Color is intense, cardinal red with sparkling hues. Forward bouquet, with trace scents of ripe plum and an undercurrent of mixed spices. Full flavor with long persistence. It will age for six-to-ten years.

The 2012 Renato Ratti Barbera d'Alba begins with an excellent aroma of black cherry, plum, wonderful smoked meat notes and a hint of mint and baking spice. Tasting reveals a tart, juicy and delicious wine filled with succulent dark berry flavors and perfectly integrated spice. The wine ends dry with lots of lingering spice, more juicy fruit, a bit of chocolate and even some balsamic notes. Fabulous! 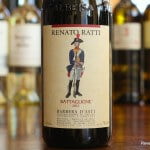 Second is the 2012 Renato Ratti Barbera d'Asti which is also 100% Barbera from Piedmont, Italy. It has an SRP of $20 and is available for as low as $15. 20,000 bottles produced. Imported by Dreyfus, Ashby & Co. Sample submitted for review.

"Since 2009 vintage we decided to bottle part of Barbera which comes from Villa Pattono vineyards in Costigliole d’Asti separately. The wine is a classic Barbera d’Asti, full-bodied and with a typical acidity suited for traditional Mediterranean cooking. A wine suited for first courses and red meats.

Intense red. Bouquet of ripe fruit with an undercurrent of spices (pepper). Flavorful, pleasing and elegant with good persistence.

The 2012 Renato Ratti Barbera d'Asti opens with very pleasant aromas of ripe plum, black cherry, spice, a little oak and hints of vanilla and cinnamon. This extremely well-balanced wine exhibits lots of juicy fruit and other flavors similar to the nose when tasting. It's perhaps a tad less complex than the Barbera d'Alba and also exhibits a bit more oak influence thanks to twice as long in French oak barriques (12 months versus 6 for the Barbera d'Alba). The dry finish features juicy fruit mixed with spice that lingers for quite a long time. It would be hard to go wrong with either of these tasty Italian soldiers!